This website was designed as an educational tool.  It does not represent official views of the Faculty of Islamic Sciences or the U.S. Fulbright Program.
English at fin 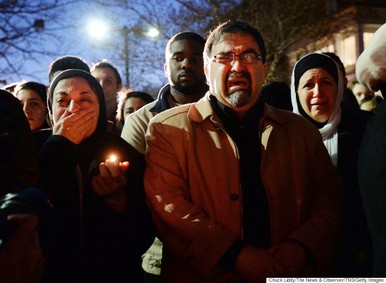 "Police said on Wednesday that Hicks' motive stemmed from an ongoing dispute over parking. But the father of the female victims, Dr. Mohammad Abu-Salha, told a local newspaper that the killing was a hate crime.

"I'm still trying to get my head around it," Asid Khan, a friend of Barakat's, told The Huffington Post from his home in Scotland. Khan first met Barakat in 2012 during a "Muslims Without Borders" mission, on which the two worked to help Palestinian children in need of dental care.

"All the kids were extremely nervous and had never been to the dentist before," Khan said of their trip. "They would come in very tense and anxious, but once Deah started speaking to them, within five minutes the kids were smiling and laughing, ready for their treatments. He had such a gentle manner and soft way of speaking to the children. He was really able to put himself in their position."

GROUP 2:
CHAPEL HILL, N.C. -- "Thousands of people gathered at the University of North Carolina at Chapel Hill on Wednesday to pay tribute to the three young Muslims who were killed by a neighbor a day earlier.

The gathering was held at a central meeting space on UNC's campus. In a show of solidarity, some of those who attended were students from nearby arch-rival Duke University. As scenes from the short lives of Deah Barakat, Yusor Abu-Salha and Razan Abu-Salha played in the background on a projector, a parade of speakers came to a podium to honor the victims.

Friends and family members spoke of the three victims' commitment to public service and scholarship, as well as their general good nature. Other than the speakers, the vigil was nearly totally silent, interrupted by the occasional sound of police sirens in the distance. And though many were in tears, there was also some laughter, as mourners recalled fond memories of the three killed on Tuesday." 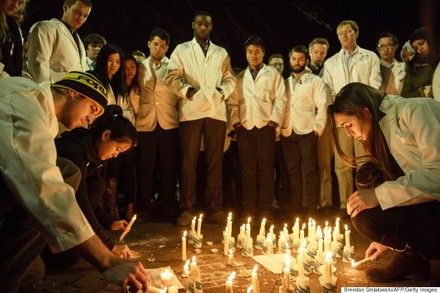 "As the ceremony ended, dental students from Barakat's program wearing white lab coats joined hands, lit candles and wept together in a small circle. Barakat was in his second year of dentistry school at UNC.

"We're all very close, very tight-knit," said dental student Michael Vick. The several dozen students in the program spent eight or more hours a day together. Vick said he'd known Barakat since high school and called him "one of the nicest, sincerest guys you've ever met." 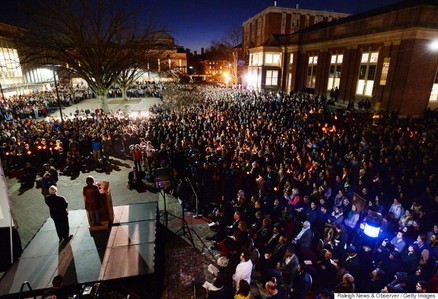 Dozens of the vigil-goers wore hijabs, skullcaps or other traditional emblems of Muslim faith. But many hundreds of others seemed to come from a variety of backgrounds. Some were undergraduates, and it's likely that many attendees may never have crossed paths at all with the victims.

"It's powerful, and it needs to be the first step," said Omid Safi, the head of the Islamic Studies department at Duke, of the crowd. "We need a chance for people to know they're not alone."

Group 5: Can you understand what this teacher says? 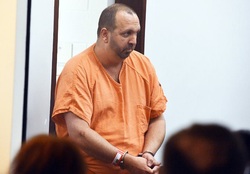 DURHAM, N.C. — Prosecutors will seek the death penalty for the man charged with the killings of three Arab-American students in a Chapel Hill, N.C., apartment complex, the district attorney’s office handling the case said Monday.

The suspect, Craig Stephen Hicks, 46, turned himself into a sheriff’s office shortly after 6 p.m. on Feb. 10. That was less than an hour after police found the bodies of Yusor Mohammad Abu-Salha, 21; her husband, Deah Shaddy Barakat, 23; and her sister, Razan Mohammad Abu-Salha, 19.

Roger Echols, the Durham County district attorney, notified Judge Orlando F. Hudson on Wednesday of his intention to seek capital punishment, according to a document filed with the Superior Court.